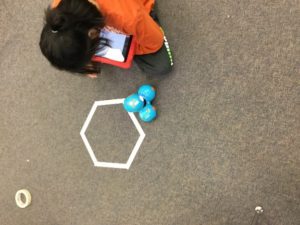 In many educational jurisdictions around the world, coding and computer science (CS) concepts are beginning to extend beyond the high school CS classroom and into other subject areas and divisions. Within the area of K-12 mathematics, coding is being recognized as a valuable context in which to experiment with and learn mathematics. As teachers integrate coding activities within their mathematics classrooms, and as policy makers consider the design of curriculum that connects coding and mathematics, it’s worthwhile to investigate historical CS curriculum in order to possibly glean insights and evidence for best-practice.

“A field evolves over time and involves the labour of many participants. To begin to understand curriculum comprehensively it is essential to portray its development historically.” 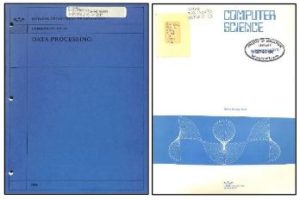 In 1966, the Ontario Department of Education released Curriculum RP-33: Data Processing, a curriculum document that included a number of curriculum expectations that are similar to those found in today’s computer programming and CS courses. Four years later, Computer Science – Senior Division (1970) provided a framework for CS courses that focused on three main units: Problem-Solving, Programming Languages and Systems, and Man and the Computer.

What follows is a brief analysis of these two curriculum documents and how they relate to current K-12 educational initiatives in Ontario.

21st Century Learning and the Impact of Technology on Society

Within K-12 education, there is currently a significant amount of interest in 21st century learning. The impetus for 21st century reforms centres on the impact of technology on society and the changing world of work resulting in new ways of learning and teaching with technology in our schools. A quick glance at historical CS from 1966 and 1970 provides evidence of an awareness of these ideas over 40 years ago.

In the first few lines of the introduction to Curriculum RP-33: Data Processing (1966), the impact of technology on society was acknowledged as an important impetus for the development of a course that focused on new methods of processing data:

“Most experts agree that within a few decades more sophisticated methods of processing data will be used by everyone in society. The more effectively we use these new tools to produce and store information, and the more skillfully we use the resultant knowledge, the greater the benefit to society” (p. iii).

Four years later, Computer Science – Senior Division (1970) identified the computer itself as possibly the most influential of new technologies. The document also introduced the idea that everyone should develop a basic understanding of computers in order to avoid apprehension:

“The influence of technology on our society is increasing rapidly. Of all technological developments, the electronic computer may have the most influence and may also cause the most apprehension. Thus, it is desirable that everyone have at least a basic understanding of computers.” (p. 3)

In a section entitled Man and the Computer, the 1970 document describes, in detail, a number of ways that the computer impacts daily living including the areas of manufacturing, transportation, communications, scientific investigation, healthcare and entertainment.

In addition, the concept of lifelong learning, often included in 21st Century Learning discussions, was clearly emphasised in the 1966 document where one of five objectives of the grade 10 course was: “Appreciate that in today’s world, education is a continuing process.”

Computational Thinking (CT), “the thought processes involved in formulating problems, so their solutions can be represented as computational steps and algorithms” (Aho, 2011, p. 2) is a popular concept at the intersection of mathematics and CS. Popularized by Jeanette Wing and her seminal 2006 article Computational Thinking, a number of educational jurisdictions, including most recently British Columbia, are incorporating CT concepts across curriculum subjects and grades.

Interesting to note, is that the 1966 and 1970 documents both emphasize the importance of algorithm design and the use of CS concepts to solve problems in a wide variety of areas. The 1966 document includes learning objectives related to defining operations to be performed by the machine, using flowcharts to develop and communicate solutions, and developing appropriate testing and debugging practices and systems when solving problems.

The 1970 document suggests three main units of study in the CS course, the first one being Problem-Solving- An Algorithmic Approach. The unit includes suggestions related to students solving problems in the following areas: basic arithmetic, sequences and series, tabulation of functions, conversions of units and number problems.

Using language that is quite similar to current CT discourse, the foreword of the 1970 document also outlines the importance of having students develop solutions that can be executed by the computer:

“The study of Computer Science might begin, therefore, with a study of problem-solving techniques. Here the student will realize that the solutions of complex problems which may involve thousands of operations are now within his reach. In order that solutions to such problems can be attempted, the student must learn to communicate the problem to the computer” (p. 3).

Mathematics Concepts and “Coding to Learn”

Both the 1966 and 1970 curriculum documents include a number of curriculum objectives related to mathematics concepts. While the 1966 courses were designed as components of the Business and Commerce departments, they still included students solving problems related to basic arithmetic, advanced arithmetic, and number systems including the addition and subtraction of binary numbers and conversions to and from the decimal number system.

As discussed earlier, the 1970 document included a number of mathematics concepts in its algorithm and problem-solving units. The 1970 document also explicitly acknowledges the potential of the computer as a learning tool across a wide variety of subjects:

“Students almost invariably find that learning to use the computer is an exciting and challenging venture. They find the computer useful in many subjects, and they find that it enriches study of these subjects.” (p. 3)

The fact that historical CS curriculum addressed components of current K-12 trends is interesting, but what does it mean for current practice? Other than acknowledging that these documents were forward-thinking, does an analysis of these documents allows us to glean insight into how to effectively implement initiatives surrounding technology and computer science concepts in our schools?

The answer to these questions is… it depends. It depends on whether or not we take a closer look at the impact of these curriculum documents on CS education in Ontario. Curriculum is only one factor in a complex process of educational reform. The fact that past curriculum addresses current concepts and ideas is important, but what’s more important is an analysis of how these ideas and concepts made their way into the classrooms.

The documents indicate the significant impact that technology can have on society. Were these lessons and ideas effectively communicated to students, empowering them to live productive lives in a technology rich environment?

The documents indicate the computers and CS is important for all, but are females and minority groups appropriately represented in CS classes and careers?

These documents acknowledge the role of computers in problem solving and coding to learn, but have they lead to students using computers as tools to explore and thrive in these endeavours?

The analysis above includes a close look at historical Ontario CS documents and their relevance to current educational trends in K-12 education. As curriculum reforms take place, historical analysis such as this can help inform curriculum policy, but perhaps more importantly, can help begin the process of analysing effective implementation.

About the author: Steve Floyd has over 15 years of experience teaching computer science and computer engineering in Ontario. He was the recipient of the 2017 CSTA Award for Teaching Excellence in Computer Science and has worked on a number of coding and computational thinking projects with elementary and high school teachers across Ontario. Steve is currently pursuing his PhD at Western University where he is investigating Computer Science and Computational Thinking in K-12 education. He is fortunate to have Dr. Gadanidis as his supervisor. Steve is also an elearning course writer and developer and has worked closely with both the Ministry of Education and private companies to help develop digital citizenship and financial literacy apps for students.